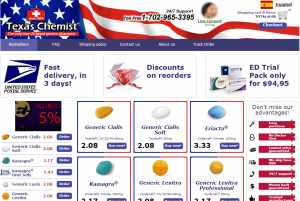 Texaschemist.com (not to be confused with texaschemistry.com, which is for the Texas Chemical Council), was a USA-based online pharmacy that sold generic medications. According to its “About Us” page, it had 9 years of customer experience. For online stores, 9 years is a good length to run, as not all online stores are able to get past a year of service. However, today, Texas Chemist is now unreachable because the shop has recently moved to a new domain to serve its customers better.

The generic drugs they sold were manufactured in India by an Indian state licensed and Indian FDA approved companies. Texas Chemist attested that the manufacturers had a Certificate of Analysis for the laboratory and adhered to Indian laws for food and drug safety. This meant that most of the drugs in the store were from Indian makers, and India-made generic brands on online shops were really common. Texas Chemist sourced its medicines from renowned Indian brands like Cipla, Ajanta, Sun Pharma, and several others and shipped the products to buyers in the United States.

For certain products, TexasChemist required a valid prescription and required the customer to fax to their number (+44-203-0025627) or scan and email to a specified address. Prescriptions were required of patients whenever they ordered impotence meds, cardiovascular health meds, and other drug types which demanded Rx—this was in compliance with the international regulations for dispensing Rx medicines.

As for the pricing, the shop sold erectile dysfunction medications such as Generic Cialis, Generic Levitra, and Generic Viagra all at $2.08 per pill, and that’s for the bulk order. The prices on the store were significantly cheaper than the local drugstore prices for the brand counterparts of these medicines.

To purchase products on the website, the customers simply clicked the “Buy Now” button for their selected product, and proceeded to “Checkout” and filled out details in the order form and then the “Submit Transaction” button. Payments allowed on the store were credit card payments alone.

Texas Chemist offered 24 hours a day-7 day a week customer support via live chat online or phone calls to their toll-free number 1-702-965-3395. There was also a “Contact Us” page with a form to be filled out for any inquiries.

There were a bunch of customer testimonials found on the site of Texas Chemist. They talked about receiving the full order within the stated period, swift handling/processing and the reasonable prices. Some also commended the effectiveness of the drugs, but some also reported minor side effects, which were naturally expected of impotence medicines.

For example, customer Mike stated that he received the order and was “impressed with the time of delivery” for his products. Beyond his comment on the speed of his order’s delivery, there were no other details.

The client David thanked Texas Chemist for his order but commented more on the efficacy of the drug he ordered rather than the good service Texaschemist.com rendered him.

The other client testimonials also aired thanks for the store, focused on the product effects and the service aspect of this Texas Chemist pharmacy. All in all, the store had good reviews from its former consumers, as reflected by the existing reviews for this drugstore.

Although the store has recently moved to a new domain, the shop was able to amass countless reviews from thankful buyers with successful orders from this web address. Like the customer comments from the recent years, Texaschemist.com reviews for 2017 were as excellent. Here are some examples:

Most of the customers leaving their reviews for Texas Chemist were anonymous, but all left good reviews the same. According to one buyer, he was able to receive the pills promptly and also aired his intent to reorder from the store.

Another buyer, who commented briefly, thanked the shop for its good service and stated that he looked forward to purchasing his stash from TexasChemist.com.

The last anonymous buyer also confirmed his receipt of the product and stated how he was immensely pleased with “every aspect” of this order. Like the others, he also mentioned thinking about reordering from this website.

Texaschemist.com offered some good deals such as their ED trials packs for $94.95 and discounts on reorders. Customers would get 5% off on their second order and 7% off on their third and further orders.

Besides the conditional discounts, Texaschemist.com offered seasonal and holiday discounts and asked the buyers to stay tuned for coupons and discount offers in the future.

Texaschemist.com was a USA-based online drug store that operated for 9 years. It sold generic medications that were sourced from an Indian FDA approved company. It offered some good deals such as ED packs and discounts on reorders. There were several customer testimonials on the website and clearly, based on these testimonials, consumers were happy with the shop’s past performance. Even the recent reviews for this web drugstore proved positive towards this online pharmacy’s credibility. All in all, due to the excellent reviews, good prices, and reliable service, I am rating this store 5 out of 5. However, it is important to note that the shop has now moved to another domain. Check out the new web address for Texas Chemist below.