Overthcounter.com Review – Do Not Buy Drugs from this Notorious Website

OverTheCounter.com is an online pharmacy with no information about its origin or duration of the operation. The company has a diverse range of medications consisting of both branded and generic versions. These include anti-cancers, men’s health, steroids, depression, anxiety and much more. As I carefully checked the prices of these medicines, I must admit that they are quite costly as 10 mg of generic Cialis is being sold at a price of 1.75 US Dollars. The drugs have an approval of FDA.

The company provides a variety of payment options which include payment by credit cards such as Visa and Master Card, American Express and Discover. The company understands the privacy concerns raised by the customers and ensure that all the data provided to the company will remain secretive and will not be provided to any third party. Two shipping methods are offered here. EMS takes 5 to 7 days to deliver, and the duration can extend to a maximum of ten days. It also comes with an option of tracking. International Airmail Service, on the other hand, takes 10 to 21 days to deliver the parcel to its destination. Nothing is mentioned about the pricing of these services. For contacting the company, clients can leave a message to the email address or call at +1 866 925 9892

The customer response regarding Over The Counter is quite high as I was able to find some reviews about it on the internet. Unfortunately, these reviews were not for the store and the customers were highly dissatisfied with the performance of the pharmacy.

Christie Scott has given only one star to OverTheCounter said that she placed an order and did not get “a tracking number”. After this, she stopped getting any response from the company. The customer said that she has “spent a lot of money to be ignored”. It was also mentioned that she would never order from this pharmacy again and she will be shocked if her ordered medicines ever reached her. 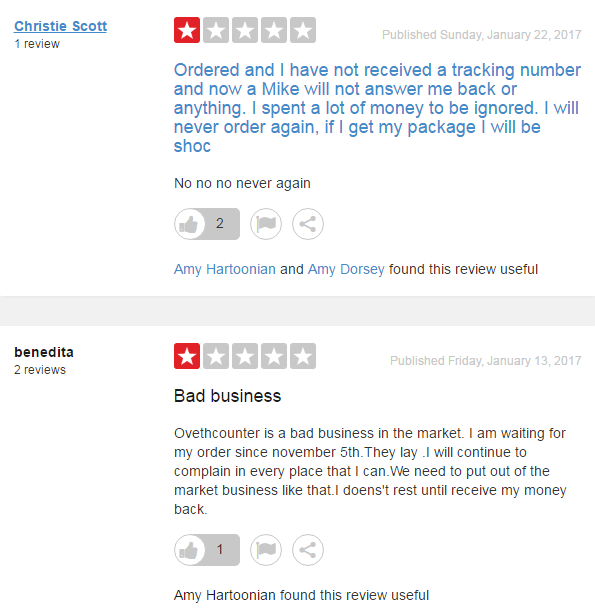 Jeff regarded Over The Counter as a store that makes the customers order “aged wine” and then sends “cheap beer”. He said that the guy on this website “communicates well”. However, the generics available at this platform were regarded as medicines having “different ingredients with 1/8th the potency”. Jeff concluded by warning the customers that this is not a reliable store for buying drugs.

The customer reviews about OverTheCounter have terrified me, and I must say that I would never even think of buying ED drugs from this platform after reading what the customers have to say about it.

Luckily, I was able to find reviews about Over The Counter made in the year 2017. So, I decided to read them one by one to check if the pharmacy has improved in operation or not.

The first comment was made by a “pissed off” customer who has mentioned that he ordered “hydrocodeine” from this store. The order was immediately dispatched and received timely. However, when the customer opened the parcel, he found “vitamin B12” instead of the medicine that he had ordered. He said that OverTheCounter is a “rip off” and a “scam” so no one should buy from them. He also called them “poor and inexcusable”.

Michael Goetz was a happy customer who has not only given a full rating to OverTheCounter but has also thanked the company in his review. He has said that the “services were amazing” and the package was “good and discreet” and was received just on time. Michael also said that he would be a “returning customer forever” and will definitely recommend this company to his family and friends. Lastly, it was said that OverTheCounter has “an amazing customer service” and “plays a high role with accuracy”. 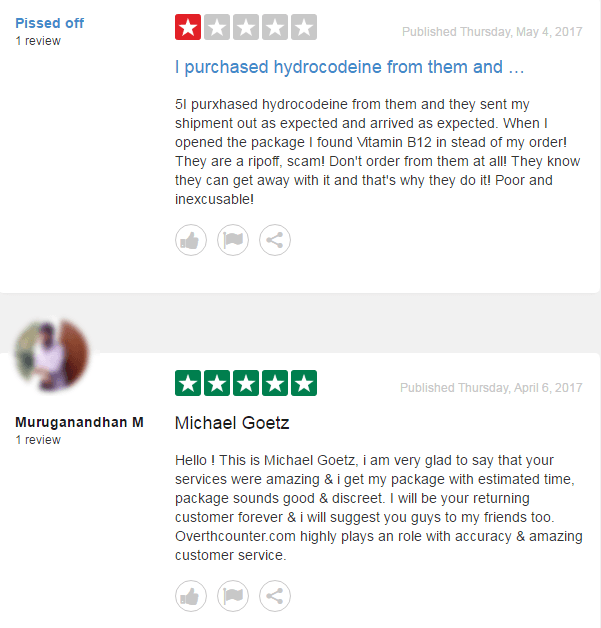 Scott has bluntly called Over The Counter a “scam” by saying that he ordered from this website and got “six tracking numbers for six weeks” but he later found that “not one of the six has been a real tracking number”. He further told that the company does not answer the phone. Instead, it sends automatic replies. 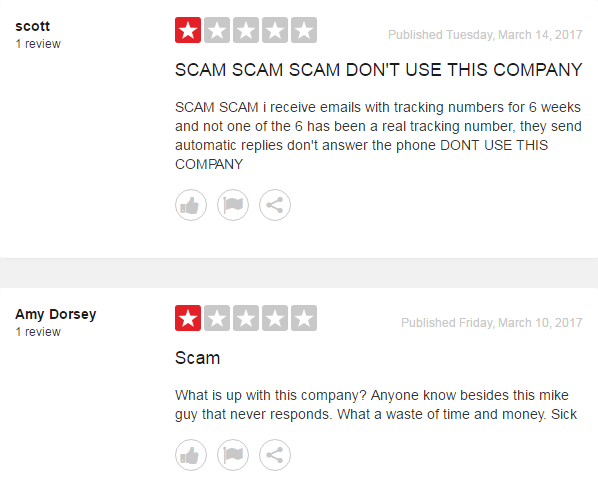 Except for the one positive review, all other comments were depicting OverTheCounter as a fake company that does not send the ordered products to its customers. It has not tried to improve itself or its services due to which it remains as a bad company that cannot be trusted.

After checking the website for any discounts, I was able to find only one offer. Over The Counter allows its customers to avail free pills with an order placed on this pharmacy.

The customers need to put in a promo code given by the pharmacy to get ten extra pills for free. It has not been explained by the pharmacy how to avail this promo code, or if this offer is applicable on all the orders or not.

OverTheCounter.com has got me scared with the terrible reviews that it has received. I do not even need to focus on other aspects of the pharmacy because according to almost every customer who has tried this store, the products are never delivered. This means that OverTheCounter is nothing but a scam and no one should ever buy ED drugs from here. I will close the discussion by giving it 1 out of 5.

About the Author: Jimmy May