Omega-lab.org Review: The Store Might Be Risky Needs Caution 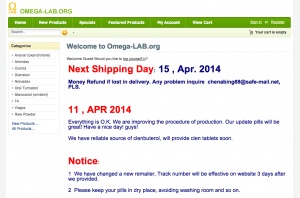 Omega lab is an online steroids Lab whose base is in China. The aim of Omega-lab.org is to vend steroids online. The company runs its operations from a university research lab in addition to offering steroids to sportspersons in China. Omega-lab.org does not list its owners or when the firm started its operations. Most of their operations are run from their bio-lab which doubles up as a pharmaceutical lab. Apart from the steroids sold by the company, they also sell Viagra as well as other men enhance drugs to their clients. Some of the popular steroids on sale include Arimidex, Clomid and Oral Turinabol. Although Omega-lab.org is based in China, some of its operations are multi – international as evidenced by the sale of their products to individuals in other continents. Although the forum has registered users who regularly buy from Omega-lab.org, guest users can also log in and sample the diverse products on offer.

According to legitscript.com, Omega-lab.org cannot be traced in their database. This begs the question – why should a non recognized entity purport to sell recognized and legal drugs? According to scamadviser.com, the site may either be based in the US or even China. Both countries are high risk regions with such fraud. Therefore one cannot explicitly state the operational base of the company. The site does not offer an express way for clients to give their opinions. This may be because Omega-lab.org specializes in the sale of some controlled substances such as steroids and hence a leeway to suppress the views and opinion of members who may want to offer their insight on the same. Given the fact that Omega-lab.org provides steroids to athletes, we are not able to know whether the products given to the respective athletes are meant for enhancement purposes or whether they are purely based on prospective health. This therefore begs the questions – are the steroids being offered by Omega-lab.org real? Is this business legally abiding since it sells drugs that may be controlled in some countries as well as in sports? Given that the owners of the business do not explicitly state their identities; could it be a clever way of trying to sell banned substances?

At the moment, Omega-lab.org offers no special coupon codes for its clients. This may be a very strong indication that the site may be engaging in the sale of banned steroids that are used for diverse enhancement purposes. It is imperative to note that banned substances are not negotiable and they go at the exact quotation price. Having admitted that they involve themselves with the sale of steroids, Omega-lab.org is a business in mystery.
However, the company needs to do the following so as to woo more clients:

• Upload different testimonials of athletes as well as other personalities who have used the steroid to good effect – although such a move may be counterproductive depending on the laws of certain countries.

• Assure the general public that their dealings are purely based on scientific researches as well as other positive ventures as opposed to the usage of the term steroids and other banned stuff.

It is only fair to say that Omega-lab.org may be a business entity whose engagements are not precisely clear. This is for the reason that the company may be engaging in illegal businesses such as sale of steroids. Steroids are banned in most professional fields as well as countries but still businessmen still find ways of selling the substances to the masses. More often than not, steroids are widely used by sportsmen and the link between athletes and Omega-lab.org is worrying to say the least. Omega-lab.org does not state explicitly the intentions of selling steroids and hence a conclusive find may be that they engage in the illegal trade. The site gets a rating of 1 star.