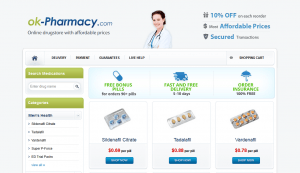 Ok-pharmacy.com is an online pharmacy that sells generic pharmaceuticals for a cheap price. The company boldly asserts to give 10% off on each reorder, that it has the most affordable prices, and that all transactions are secured. The site itself is clean and professional in appearance. They also offer a 100% money back guarantee.

However, on the “about us” page, the information is nonspecific. The customers can’t tell just where these medicines are being shipped from, and who exactly, is this company that is selling the medicines at such low-cost. Buying medicines from an unknown source is potentially dangerous to health and your finances. In fact, the site states that the package shipped for delivery will have no return label – for the customer’s safety, plus there is no address or phone number you can use to reach the company. The best you can do is send a message through “live help,” which is actually just a page set up for messages because no one is available. Their whereabouts are very secretive, and that’s suspicious.

Digging around, looking for customer reviews, there wasn’t much found, aside from the testimonies on the ok-pharmacy.com site itself. However, we did find a statistical analysis scamadviser.com did on the site. In a cautioning red background, it warns that the site has a low trust rating and the site is potentially unsafe. It says that the site is U.S. based, but possibly has connections with Russian Federation. Russian Federation has a high association with fraudulent activities. Scamadviser.com has rated ok-pharmacy.com with 23% trustworthiness score. Not very trustworthy at all, especially when you take into account that this site has been listed as “rogue” and unreliable.

Trying hard to find user reviews outside of the testimonies ed on ok-pharmacy.com, we did come across a single, lonesome review on pharmacyreviewer.com. This one reviewer rated and reviewed the site on July 1, 2014, and he gave a positive review. “Great pharmacy, great products, great service,” he wrote. His overall rating was 4.7 out of 5, and he stated having no issues whatsoever with his order and shipment.

There are no online coupons, except for the 10% off deal for returning customers only.

Though the site is neat and put together in appearance, we’re hesitant to give ok-pharmacy.com a star rating of any more than 2 out of 5. The lack of contact and background information for the site is a major red flag. We’re forced to ask, what are they hiding? Siteadviser.com only heightened our suspicions, because the site is potentially operated in Russia, which is a high risk country, in terms of scams and frauds. The single review we found on pharmacyreviewer.com was almost too eager to give it a high rating, and we are skeptical of it. If ok-pharmacy.com really was such an affordable online pharmacy, there’d be more reviews and interest. Since there isn’t, we have little to go off of, except what was found. Since your health and finances may be at risk, we suggest you approach the site warily if considering making a purchase.