Mymexicandrugstore Review – Appears Legit, but Try at Your Own Risk 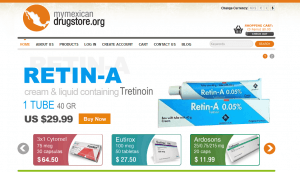 Mymexicandrugstore.org is an online pharmacy based in Mexico that sells medicines 70 to 90% less than the United States. It claims to use quality ingredients and claims to be safe and reliable, in selling both generic and brand name medications. Searching through the site, you see pictures of medicines with the prices listed there. As an online pharmacy located outside of the United States, the appearance and the content of the website does not raise any immediate red flags.

The site claims to be five years old and says it is using customer complaints to improve the site. This sounds sincere enough. The fact that on the “contact us” page there is an actual address listed is a good sign, except that there is no phone number listed. There is, however, a blog that is posted monthly, which shows they are invested in growing their business and acquiring new customers.

In terms of reviews for mymexicandrugstore.org – there are a lot. Some reviews date back a few years, which is a good sign because fraudulent sites are up for a short time, scam as many people as possible, and then they disappear. Mymexicandrugstore.org does not fit that description.

According to Scamadviser.com, mymexicandrugstore.org’s claim that it is located in Mexico is accurate. It also claims to be five years old, which holds truth. However, as of 2012, this site has been claimed as a “rogue” pharmacy – meaning negative feedback indicates that the pharmacy may be deceptive and not entirely honest in its assertions.

In fact, according to its Facebook page, which has over five hundred likes, the overall rating is 2.9 out of 5, with customers complaining about bad customer service and slow shipments. There are some claims that the site used to be good, but has since gone downhill – which might explain the statement from mymexicandrugstore.com that they are trying to improve.

According to Pharmacies Reviews, mymexicandrugstore.org is not listed under the Scam Pharmacies section. However, this could be due to little information, because it also does not claim that it is a hundred percent genuine site. It merely encourages you to take precautions when placing an order with the site.

None online coupons were found on the site.

It’s hard to say, judging from the reviews, whether mymexicandrugstore.org should be your online go-to pharmacy. Most of the complaints seem to be about bad customer service, how no one responds to emails and complaints. Another thing is the shipment complaints. Apparently, sometimes the orders do not go through, other times the shipments are slow to arrive and sometimes shipments never arrive.

There doesn’t seem to be much complaint about the quality of the medications. No one reported the site as a fraudulent or a scam. The biggest problem we see is this site is that your shipment may take its time arriving, there is no tracking number, and if you ask about the whereabouts of your order, according to a large number of complaints, you’ll probably get no response.