Chemist-4-u.com Review: Make Purchases at Your Own Risk 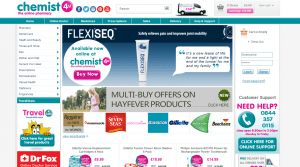 Chemist-4-u.com is an online pharmacy that sells a variety of medications. Among the medications available are ones for allergies and hay fever, cold and flu, first aid, kid’s pain relief, personal care, aids to stop smoking. Others include dental care, health and beauty, house and home care, men’s products used for grooming, mother and child products, prescriptions, pet medication, sexual health and fragrances. This pharmacy prides itself for been a one stop shop. They offer a wide range of products such that all their customers have an easy time making their orders as they can get virtually anything they want here. They have been in operation since 2001. They offer all their products at highly discounted rates. They are based in the UK and owned by Innox Trading Ltd. It is run pharmacists whom are fully qualified and operates from premises of a registered pharmacy. They make deliveries in the UK, Europe, USA and Canada. UK deliveries have the standard delivery for all orders less than 20 sterling pounds charged 2.95 sterling pounds regardless of the size and weight. The options in the standard deliveries include packaging, 1st class delivery on royal delivery costs and handling.

This pharmacy has a lot of negative reviews from its customers. One Fay yandell terms their customer care services as disgusting. He says that he bought a massage chair from the company in June and after using it once it stopped working. He had a difficult time getting details of how he could send it back to the company and get a replacement. He managed to send it back on august but until October nothing had been send back to him. He then contacted the company and they promised to send a replacement yet nothing was send back. He sent an email to the CEO as a last resort. All his efforts were futile. He says that he will never use the company again. Louise says that he ordered 3 shavers with batteries. They send him the 3 shavers without batteries accompanied with a note saying that they are sold out but they at least send him something else in the same category. He says that he did not prefer something else what he preferred was the refund of his money. He classifies their customer care as pathetic. Maggie Prince is another unhappy customer. She says that she has used this company severally. She recently ordered 4 pearl drops party sparkle and instead she was sent 4 pearls drop items. Since there was no any returns note she called the company severally and sent numerous emails. The office was never open and she did not get any responses to her emails. She later used the PayPal dispute and they did not respond to it.

They also offer free shipping for all orders over 20sterling pounds. This is a very well calculated incentive as most of the customers have a very hard time organizing for the shipping of products. They can prefer to make a big order to enjoy the offer. This in turn increases the sells record in the company. With the increase in sales there is a likely hood of increased profits.

Chemists-4-u.com has a lot negative reviews from its customers. This does not portray the pharmacy in a good light as these remarks raise a red flag. Among all the reviews there is no any single one of them that has a positive remark on the pharmacy. It is therefore advisable that all possible customers should be extra cautious when dealing with the pharmacy. They should carry out a very diverse research before making any orders with this company as there are great chances of loosing their hard earned money if they ignore all the remarks cautioning them of the possible danger. The pharmacy gets a rating of 1 star.