on June 8 | in Reviews | by Stephen | with No Comments

The first opinion I got of Cheap-rx.com when I logged on to the website was one of a copy site. Bearing the Pharmacy Mall tag again, this was surely not the first time I have seen this, and it is not the second time either. As always, the Pharmacy Mall affiliate said that it has been in existence since the year 1997, but Cheap-rx.com itself has been online for sixteen years. At least, that is what the copyright said. In all of these time, they have been based in Canada. The generic medication business is on the rise right now and seems everyone is trying to make some profit by setting up an affiliate link with a particular internet vendor.

There is quite the extensive offering of pills from Pharmacy Mall affiliate partner. Looking at their extensive catalog, it was like there was nothing one could be looking for which they didn’t have in stock. In all of these, they were also quite popular with ED medicine. Viagra can be easily found on the vendor, selling for just $0.27 per pill. Not so far away from it is Cialis which the vendor sells for a retail price of $0.68. That does represent some good savings.

I didn’t even need to check to know that they would promise their goods were made from India. As such, the next thing that caught my eye was the claim of certification by Indian FDA. Furthermore, they even boast badges from MIPA, CIPA and Pharmacy Checker. Cheap Rx e-seller does accept their payment via credit cards, limiting the options to just VISA and MasterCard. As soon as this is confirmed and the order gets processed, it is sent out on shipping.

Since the buyers have all power over their shipping, they can then choose from either EMS or Airmail options. The main difference is in the price and delivery times. For EMS, the customer pays $19.95 and waits 3 – 8 business days for the package to arrive. If they had gone for Airmail instead, that is cheaper at $9.95 but requires them to wait for 2 – 3 weeks instead. To get more information, the vendor would like customers to get in touch via an email support form or one of the toll-free numbers on Cheap Rx.

There is a strict policy against the returns of orders on Cheap Rx, but they are game for reshipment and refunds if the package gets lost or even damaged during shipping.

With the kind of user reviews that this vendor has on the internet, it is a big surprise why they have not been taken down already. From an independent platform, the first comment I saw was that of John who claimed that he ‘[bought some pills] from cheap-rx.com and never received the pills.’ He also wrote to them to ask for a refund, which they lied that they granted already. In the end, he had to label them ‘FRAUD.’

His sentiments are shared by Mariano who ‘order (sic) on 2nd November a medication from cheap-rx and I haven’t received anything yet.’ In summary, they have not received their products. Being independent reviews, these I take as the gospel since the vendor has no control over it.

Asides from a low trust rating from ScamAdviser, it is said that the website might be from Pakistan in the first place. Not only that, but there is a 0% rating on safety. It is thus surprising to see that they still manage to have lots of visitors. 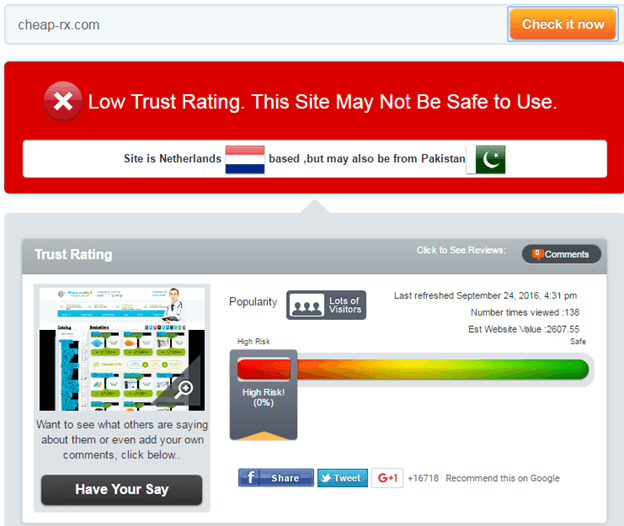 The story is pretty straight with LegitScript.com. Without much ado, Cheap Rx was labeled a Rogue internet pharmacy.

There are some savings options available to the user via this website. The vendor advertises a progressive savings package on every pill ordered by the bury. This ensures that they get to save more and even more as the volume of their order increased.

The first impression, they say, matters most. For Cheap-Rx.com though, the first impression was the only impression that it had. Having been seen to be an untrustworthy copycat affiliate link of Pharmacy Mall, Cheap-rx.com goes on to be labeled a Rogue pharmacy from Pakistan with very low trust ratings. They didn’t even manage to do well by their customers.

Cheap Rx is just a waste of time and money to anyone that does business with them, and I would strongly advise against that. Likewise, I would rate them as just 1 out of 5.

About the Author: Stephen

Stephen K. Walker is a geek, blogger and a foodie. He has a vast experience in traveling (especially to exotic places) and purchasing from abroad. He loves sharing resourceful knowledge with others during his free time.
« Canadianonlinemeds.com Review – Rogue Internet Pharmacy from Panama
Clearskypharmacy.net Review – Experienced Canadian Pharmacy with Great Reviews »
TOP RATED PHARMACIESLast Updated: February 12st, 2018
1. PharmacyMall.net

Get discount from already the lowest prices on the net