on October 5 | in Reviews | by Jimmy May | with No Comments 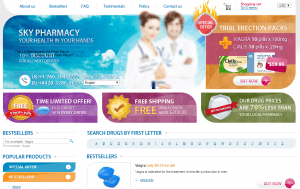 24h-canadian-pharmacy.com is an online pharmacy that I visited recently to shop for my prescription drugs. I had an experience that I want to share with you. 24h-canadian-pharmacy, as the name proudly proclaims, is a Canadian pharmacy store which set out from conception to provide inexpensive generic medications. On the homepage, I learned the website is offered in German, French, Spanish, Italian, and English. The “About us” section on the menu was full of references to “high quality” medicines. I also learned that this store has been operating since 2004 and receiving customer service assistance doesn’t require sign-up.

Next, I headed for the pharmacy’s FAQ menu. Here I got to know that presenting prescriptions is not required to obtain your desired medications. However, they advised that prospective customers should seek a doctor’s recommendation and singled out possible contraindications as a good reason to do so.

The “Categories” menu on 24h Canadian Pharmacy revealed a wide range of generic medications like antifungal drugs, antibiotics, and cardiovascular medications. In addition, I saw personal care products for hair loss and skin care as well as over-the-counter drugs. There are also special categories for men’s health and women’s health. The “Bestsellers” category is topped by ED medications like Viagra and Cialis.

24h Canadian Pharmacy offers branded Viagra, Cialis, and Levitra as well as generic versions for extremely low prices. Brand Viagra is priced at $3.32 a pill, while Brand Cialis is priced at $3.66 a pill. The generic version of the former costs $0.32 a pill while the latter costs $0.67 a pill. I found out that if I ordered any of these I would receive my drugs in 2-3 weeks via airmail for $10 (US Postal Service for US buyers) or 3-8 business days via EMS for $20. Their return policy promises to resend but not refunds.

I dialed the numbers given at the top of the page at different times and customer service was unavailable. I haven’t gotten a response to the message I left for a customer service reps on the website. No live chat either.

I began to look for customer reviews for 24h-canadian-pharmacy. I started my search on the website and as expected, there were “testimonials” from different customers which affirmed the site’s credibility. I have attached some of them below.

Jonathan from France could barely contain his excitement for having received his order writing, “Yes! I have received the order and I am extremely pleased with the service and the pills. He explained that he was so pleased because back home, he had been putting up with expensive payments for the same drugs which he previously received from his general practitioner through prescriptions.

Denis Powell, who lives in Deutschland(Germany) wrote that he is not exactly new to shopping in online pharmacies. His previous experience was “unsatisfactory”. Amid his skepticism, he decided to try this pharmacy and was “pleasantly surprised” to have an “awesome shopping experience”. He wished he had found it earlier because it saved him time and money.

These positive testimonies from customers in different locations weren’t enough for me. It’s rare to find negative reviews on an online pharmacy’s testimonials page. I needed to confirm credibility from a separate group of reviewers. My quest left me disappointed. The same reviews, without any modifications whatsoever, exist on what appears to be clone websites. I had no doubt in my mind that 24h-canadian-pharmacy.com was a scam. While scams exist in every corner of the Internet, it is especially frustrating to see such disregard for human health.

I needed to be double sure about my conclusion since there was the possibility that this was just a misguided marketing campaign. So I glanced through reviews from the past year. Maybe, recent reviews would be more transparent.

I came across a review by Samuel who resides in Spain. He claimed to have received the Cialis he ordered from the pharmacy and expressed his thanks. “Hi. Thank you for sending the Cialis I have received the ten pills that you sent and have tried them”. He requested that the remainder of his order be replaced with Cialis since it was effective, and praised the customer support team for being “helpful”.

St Patricks from Irish France similarly praised the “prompt and efficient service” he received. His medications arrived when he expected them and that prompted him to recommend 24h Canadian Pharmacy.

Unsurprisingly, I found these very reviews on other sites as well, confirming that I was indeed shopping on a fraudulent website. Scamadviser indicted 24h Canadian Pharmacy, giving it a low trust rating and labeling it unsafe to use.

Of course, a scam isn’t a scam if it doesn’t involve offering all the free stuff imaginable. 24h Canadian Pharmacy offers free airmail shipping to any destination for shopping over $200. It also offers a 10% discount for such purchases plus free Viagra pills with every order. I found special offers for so-called “Trial Erection Packs” of the top three erectile dysfunction drugs: Viagra, Levitra, and Cialis.

I also found out that buyers don’t need to pay customs fees because it takes care of that. I didn’t find any field on the checkout page dedicated to accepting Coupon codes. Some of these offers are commonplace in the online stores of a variety of businesses. On 24h-canadian-pharmacy they are only as trustworthy as the customer reviews. I wasn’t fooled by all of this. As far as I am concerned, credibility and transparency are more important than getting the cheapest prices available.

Shopping on 24h-canadian-pharmacy was a lesson in vigilance. From the get-go, not being able to reach customer service by phone or through the form I filled in the “Contact Us” section was enough for me to be suspicious. It was horrifying to find out that the user comments highlighted on the site were faked and duplicated on other clone sites. It was still shocking to see the amount of effort poured into this fraudulent venture. I wonder how they got CIPA, CPA and MIPA approval. I doubt that the approval seals are even real. On a positive note, throughout this experience, I reminded myself of the rewards of doing thorough investigations. Some pharmacy review sites have published some experiences of those who have been scammed by 24h Canadian Pharmacy and their cohorts. Some victims didn’t know until they used fake medicines. Thankfully, there are alternatives. I got acquainted with a number of trustworthy vendors that offer ED medicines at a cheap enough price. I rate 24h-canadian-pharmacy.com 1 out of 5 stars. I would rate it lower if that was possible.

About the Author: Jimmy May

Get discount from already the lowest prices on the net